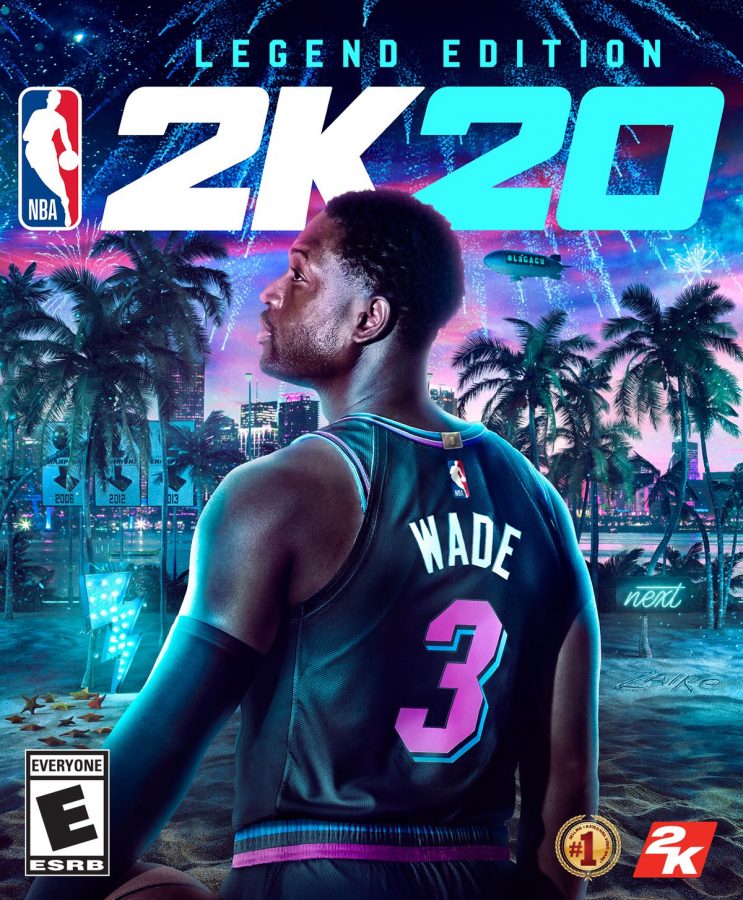 The Legends edition cover of 2k20 for the Sony PlayStation 4.

In MyCareer you make your MyPlayer by selecting a pie chart on what you want to be able to do(shoot, pass, dribble, finish at the rim, or play defense.) The pie charts are very diverse and you have a select amount to choose from. You also get to choose from pie charts for your speed, acceleration, vertical, and strength. Depending on the pie chart you get a certain amount of badges for each category. Badges are things that boost certain things you do like dribbling or shooting. Once you get done with the pie charts you get to choose your Takeover. Takeover is a thing that boosts all your attributes especially your strongest attributes. All Takeovers include post scoring, slashing, shooting, shot-creating, defending, and playmaking. After choosing your takeover you can test your player at any overall for free. But if you don’t test your player you’d have to pay to upgrade him. To upgrade your player you have to spend VC(Virtual Currency). After you finish creating your MyPlayer you start off in college and then you work your way to the NBA. After you finish college you get to participate in the Draft Combine. How you do in the Draft Combine depends on what pick you are in the NBA Draft. After you finish the NBA Draft you get to change your contract in order to increase your minutes or VC you earn per game. After that, you are officially in the NBA and you work your way up in order to start on the team you select.

In MyTeam you can make a team using all of your favorite NBA players. When you first start off playing MyTeam they give you a starter pack which is a pack that comes with NBA players, coaches, and playbooks to start off with. After you finish opening all the packs you can officially play all of MyTeam’s modes. The only way to collect more NBA player cards is by opening packs or by buying them with MT from the auction house. MT is short for MyTeam points and they’re a currency in MyTeam that is used to buy players. The Auction house is an auction for players to be bought and sold. Some cards may cost more than others because of their rarity and how good the player is. All of the rarities in order(from worst to best) include bronze, silver, gold, emerald, sapphire, ruby, amethyst, diamond, pink diamond, and galaxy opal. In MyTeam you can play against other people online or CPU with a lot of different modes. All MyTeam’s modes include Triple Threat, Domination, MyTeam Tournament, and MyTeam Online. MyTeam is just a fun mode with lots of things to do and it is great because you can upgrade your team by playing online or against CPU.

In Park/Neighborhood you take your MyPlayer off of the NBA court and you play on the park courts against other people’s players. In Park, there are different events that happen that can change the park. For example, the most recent events include Treasure Hunter and Beats. Beats was basically an event that made the park all dark and the players wore clothes that glow in the dark. The court was also glow in the dark as well as the hoops. There was also a live DJ that made Beats even better. Treasure Hunter was an event where the park and courts were pirate-themed. The goal was to complete a checklist to find that treasure in the park. The treasure was extra VC but that was interesting to complete the checklist. In Park, you can fully customize your player’s hair, clothes, shoes, tattoos, accessories, headgear, and you can even have your player ride around in bicycles and skateboards. You can take your player to Foot Locker, Docs Barber Shop, or Swag’s clothing store. In Park, there are 2v2 courts and 3v3 courts, but in the park, there is an extra park called ante- up. Ante-up is a park where you play for VC(meaning you wager your VC on the court for however much VC the court requires). Park is so popular because people like to compete with their MyPlayers to see who is better.

In conclusion, NBA 2k20 is a fun basketball game that you can do so many things in. NBA 2k20 is the most realistic basketball game released and will continue to be for years. Even though 2k20’s developers mess up sometimes they always end up giving the community what they want and more improvements to the game. Out of a 1-10 scale, I rate this game a 9/10.