A Day at The FBI Teen Academy 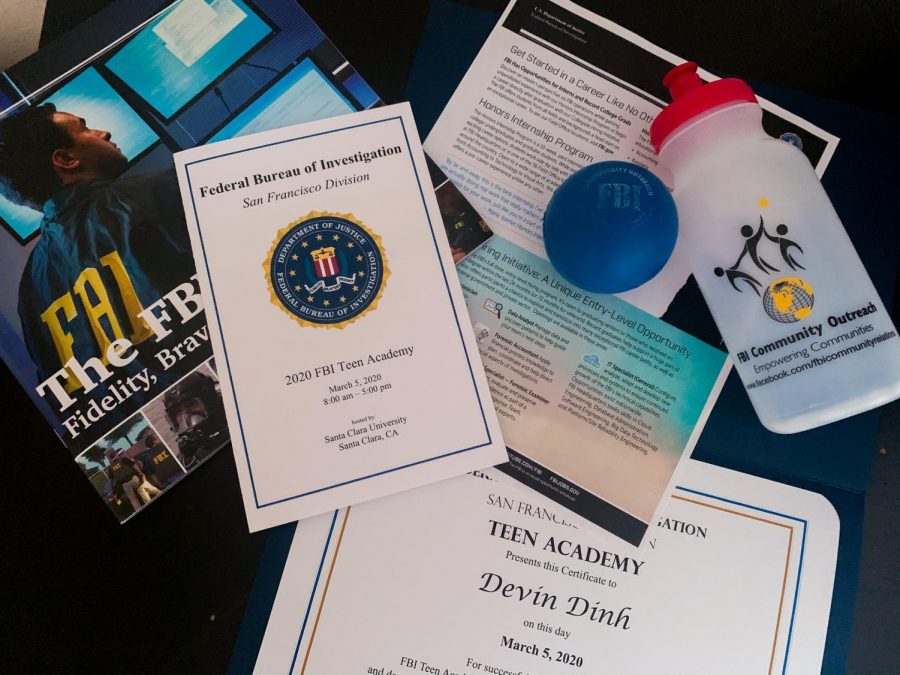 Items, information, and a certificate that I received from attending the FBI Teen Academy. There was a white hazmat suit passed out, but it is not pictured.

“Good FBI officers are not noticeable. You would never look at them,” Ridley Scott, once said. There’s something intriguing about the FBI, about what makes it secretive or what pops up in people’s minds. I applied to the FBI Teen Academy in early January 2020, to see what the FBI is and what opportunities it can provide for me as I had little clue about the law and justice field aside from watching those crime scene TV shows once in a while. As I am a part of the Health Academy, I wanted to explore all my available pathways such as the law and justice pathway.

I got that email on February 14 saying “We are pleased to announce you have been selected to attend the 2020 session of the Federal Bureau of Investigation’s Teen Academy!” That email surprised me as I just let it fly by me if I got the opportunity to go or not. I later found out that I was the only one from the school district or perhaps the area to go to the FBI Teen Academy.

During the FBI Teen Academy in March of 2020, there were many presentations/workshops on various topics related to crime that can occur all around the world, with an emphasis being focused within the Bay Area. And with the Bay Area, you also have to worry about more things, especially online as the FBI created a cybercrime division within Silicon Valley as “Computers are the new crime of the millennium,” a field agent said (unnamed due to privacy concerns).

2020 is a new era! It’s not spy vs. spy anymore! Crime can be launched by any individual such as educators to businesspeople to even FBI field agents, well former field agents. White-collar crime was a topic that was mentioned during the FBI Teen Academy as even higher-up individuals can commit crimes such as stealing intellectual property such as someone stealing information regarding the new iPhone or public corruption cases such as a recent one in San Francisco.  White-collar crime was a big topic as Silicon Valley is filled with tons of intellectual property as tech. companies reign the area. Anyone, even those you least suspect can do a crime and when you think you won’t get caught, most likely the authorities are one step ahead of you.

Crime is everywhere, no one will deny that. That is why everyone works for the FBI is trained uniformly before they specialize in their given field. Because of this, FBI field agents and forensic analysts are able to investigate a crime scene throughout the country or wherever they get an assignment such as locally in the Bay Area or down in Southern California. However, the main goal of the FBI is to protect the country’s people, especially through counterterrorism in order to attack crime/terrorism before it occurs.

There were many misconceptions that the FBI addressed to us, but one struck me. Us, teens, may be familiar with the ‘FBI agent memes’ where it depicts an individual doing something that is normal (or malicious) such as switching your browsers to incognito mode, and that the FBI is able to see what you are doing about somehow. However, the FBI, itself is unable to look at what you are doing as there are specific processes needed in order to retrieve that information such as warrants or if a case opens against your name.

What are the opportunities within the FBI? Well before you think about any career within the FBI, you need to have a four-year degree at a higher-educational institution with any specialization/major, which surprised me the most! However, you need to be the ‘crème de la crème’ meaning you have to be the best at what you do as you are going to represent the FBI and the United States for the matter.

Within the FBI, you can choose many career pathways, however, with those careers that are more rigorous such as a field agent, there is ‘stricter’ testing involved such as a more rigorous fitness test and more frequent fitness tests. Speaking of tests, there are three phases associated with becoming a part of the FBI. There is the application exam in phase one, a fitness test and a conditional job offer in phase two, and a polygraph test in phase three. The majority of this information is public via a simple Google search.

To my current seniors, future seniors, or those currently in college reading this, there is an opportunity for you to be apart of the FBI for a paid summer internship known as the Honors Internship Program in Washington, D.C. or at other locations where the FBI has field offices. You have the chance to work alongside current FBI employees and learn about their day-to-day duties. However, since it is the FBI, you are still subjected to the same processes and tests that other applicants have to undergo. The application typically opens in August and closes in September of the same year, perhaps even before your classes start as there are many resources required for the FBI to look at your application such as undergoing background checks.

Being able to have the chance to go to the FBI Teen Academy was one of the best experiences I have had in my high-school career because I was able to meet new peers from high schools all around the Bay Area and even those from Eureka to Monterey. I got the chance to learn more about the “secretive” world of what the FBI does in its day-to-day activities. The connections with the FBI’s work to the Bay Area also gave me another perspective on how to look upon the area that we live in currently. From this day of experiences, I was able to gain connections and personal knowledge from field agents within the FBI – fostering my curiosity into the world of law and justice through the FBI.