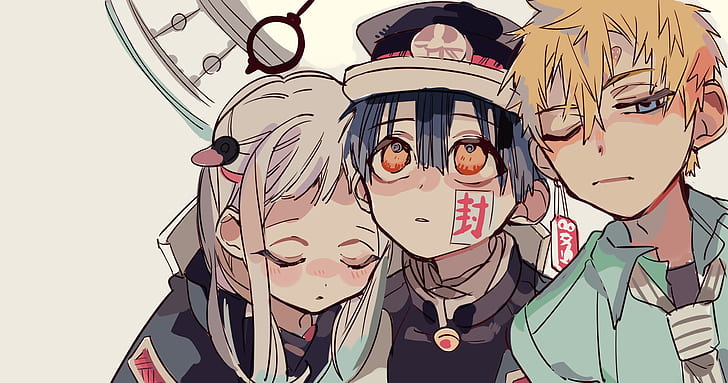 A popular manga series called, “jibaku shounen hanako-kun’, or in English, “Toilet Bound Hanako-kun”, is getting an anime. While the manga has been out since 2014/2015 in japan, us westerners didn’t get it until 2017/2018.

The story is based at Kamome Gakuen, a middle/high school with a lot of paranormal activity. The rumors are what keeps the supernaturals going. There are 7 ministries in total with Hanako being the 7th and the boss. He keeps the balance of the supernaturals and humans.

The story follows a trio first there’s Yashiro Nene, a first-year high schooler at Kamome Gakuen who makes a wish to have her crush love her back. She’s earnest and outgoing and seems to desire the approval of others, she’s also really insecure because she has fat ankles and plus her radish colored hair so she got the nickname “radish”. She always sees the best people, especially in Hanako. She loves charming boys and really wants a boyfriend but is scared she’s not ladylike enough for one. She also runs the gardening club.

Our second protagonist is Hanako-kun. One of the seven mysteries at Kamome Gakuen. He’s the rumor that if you go the girls’ bathroom in one of the buildings and call out “Hanako-san” name he’ll either respond back or grant a wish. At first, the rumor was “Hanako-san” which made it seem like he was a girl so when Yashiro did summon him she was surprised he wasn’t a she. Hanako is cheerful and childish and loves teasing Yashiro and Kou. He’s sorta perverted but gets flustered easily. He’s kinda sadistic when fighting though.

Our third protagonist is Kou Minamoto, who is a middle schooler at Kamome Gakuen. He’s a young boy who comes from a family of exorcists. So, he can see ghosts. At first, he wanted to exorcise Hanako but after a while, he started to see he wasn’t a bad spirit and when his older brother Teru (Yashiro’s crush) tried to do it Kou defended Hanako and they became good friends. Kou is cheerful and may look like a delinquent he’s far from that. He’s kind to his friends and may jump into things headfirst but he grows from that. He’s understanding and really protective of Yashiro and Hanako and his other friends.

Toilet Bound Hanako-kun is streaming on Crunchyroll and Funimation online now and new episodes are coming out every Thursday. The series is getting 12 eps this season and the fourth one is coming this week. So, if you’re interested in watching you should start now or wait until it’s over, or be like me and just read the manga. Whatever you end up doing I hope you enjoy this series as much as I do!