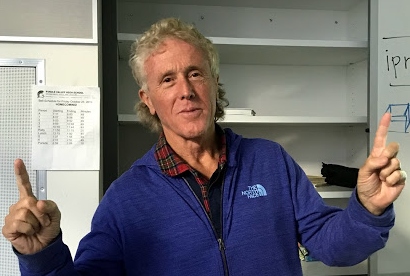 Hey! Hey you! Are you a student that wants to go to Japan? Then the Richmond-Shimada Friendship Commission is for you!

Richmond and Shimada are sister cities, having a cultural exchange program where they each send students to the other’s city.

“It started in 1961, when the mayor of Shimada and the mayor of Richmond happened to be on the same airplane together, and they thought ‘Wouldn’t it be nice if we could have a sister city relationship, make cultural exchanges, send students over, send cultural ambassadors over, send sports peoples over, and just share culture between 2 different countries, and little by little the program developed to what it is today” says Mr. Pinto.

Mr. Pinto previously worked in the district. He then decided to take a break to go to Japan, teaching at a university and had a publishing company where he would publish and sell textbooks to universities. After nearly a decade, Mr. Pinto came back the Bay Area, taught at Kennedy High School for nearly two decades, and finally came back to his alma mater, PVHS, as our new digital photography teacher.

“I often go to Japan, I love visiting Japan, I love Japanese food, it’s really a fun place to visit, lots of interesting culture, temples, shrines, pretty girls–no just kidding,”. We got a good chuckle out of that.

“Every year in March, about eight students from Japan come over with a teacher and they visit schools,” continues Mr. Pinto. In our schools’ case, they haven’t visited, as we were in portables and there was nobody at our school that was actually in the program.

The program is open to all current sophomores and juniors in the West Contra Costa District. Seniors aren’t allowed because when it’s time for the Shimada students to come here, by then Seniors will probably be off to college. Freshmen are deemed too immature to participate in the program (haha!)

“The program sends around 4 students to Japan every year, along with a chaperone, and they will spend a month in Japan with host families. Every student who’s done this has fallen in love with the program. A lot of them come back and they want to study Japanese, they wanna go back to Japan in some way shape or form. I mean, it’s really a life-changing event,”

This year, since Mr. Pinto brought the program over here, students from Japan are going to visit Pinole Valley High in March 2020.

“Pinole hasn’t been involved with that… I want to get that started. One of the things we can do now is we’re gonna have the students visit us in March, and I want to get students involved in that here, planning for that,” Pinto

Mr. Pinto notes that his students at Kennedy would get community service credits for helping out with the Japanese students staying over. Some things his former students did is to plan for the event, set up lunch for the students, and work as chaperones when the students come over.

When submitting an application, the district narrows it down to 20 students that get interviewed for the district, choosing the four best candidates for the trip.

Applications for this trip are due December 14, along with a teacher recommendation and a Japanese passport.

Get one from Mr. Pinto in D102, or download the application: