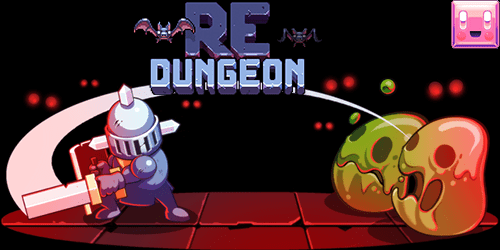 For a while, mobile games began to fall out of my favor; the majority of apps downloaded onto my phone sat dormant. However, after a friend recently recommended Redungeon, a free game from Nitrome, I’ve found a new reason to hop back on. 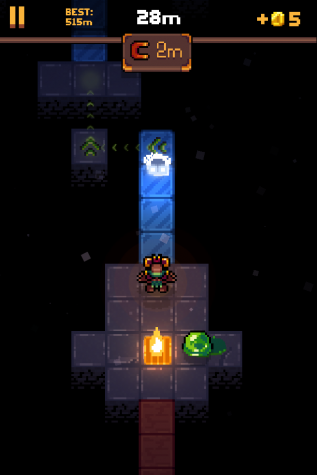 For starters, this app is very well-optimized. My aging iPhone 4s often struggles to run extremely simple games like Dune, which takes up 170 MB of space. But Redungeon, which is arguably more complex, both runs perfectly for me and only takes up a mere 70 MB. Regardless of your device’s model or storage space, there’s almost no reason not to download this.

The game sees you running through a procedurally-generated dungeon filled with a slew of devious traps and monsters. It seems simple at first, but the constant obstacles you face will test your reflexes and timing. Dive headfirst into danger, and you’ll surely get killed; wait for too long, and you’ll be caught by the advancing “darkness.” Each run is a fun challenge because you’re constantly on your toes, preparing for what could come next. 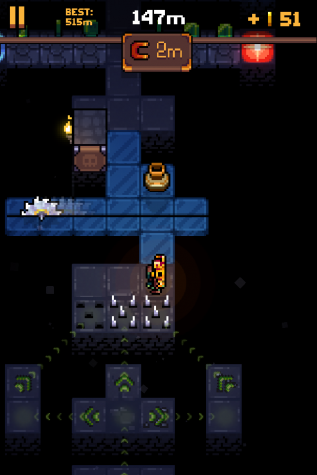 Fortunately, the game’s character roster provides a diverse batch of skillsets to help you out. Gold you collect throughout the dungeon can be used to buy and upgrade characters, each with a unique set of genuinely helpful traits and abilities. This even extends to the game’s cheapest characters: Sir Gylbard can fend off attacks with his shield, Creep A. Crow can scare away monsters, and Kazhan can fly straight past harm in his bat form. These varied skillsets, along with an achievement system that encourages trying out every character, give players a reason to keep coming back.

Raising enough gold to make purchases can take some time, but the perks you get in exchange make it a worthy trade. The game also opens up avenues that reward skill with faster gold gains. The difficulty ramps up as you progress farther into the dungeon, but so does the amount of gold you collect. If you’re feeling brave, there’s also plenty of risks you can take (such as opening cursed treasure chests) to  grab more cash. An option exists to pay real money for in-game gold, but it never felt like the game was less fun without using it. Instead, the gold system motivated me to do well each time I played. 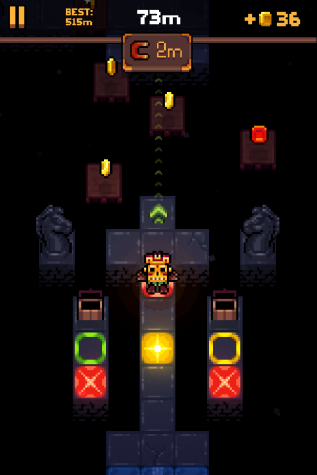 The retro-styled graphics do a good job of making important objects “pop” out with bright colors, but the dark background makes the game especially hard to play with glare. There was also a few times where a death looked like it shouldn’t have happened, but these instances were very infrequent.

My biggest gripe with the game comes from its controls. Mobile games are particularly tricky to develop controls for, and Redungeon makes a good effort by providing three different control schemes. Unfortunately, none of them are perfect: swiping sacrifices a bit of precision,  the “arrow” configuration suffers from awkward button placement, and the d-pad is prone to misclicks on small screens. These are very minor imperfections, but they could mean the difference between life and death due to the precision that the game requires. I’ve now grown accustomed to the “swiping” method, but control flubs cost me quite a few of my best runs leading up to that point. 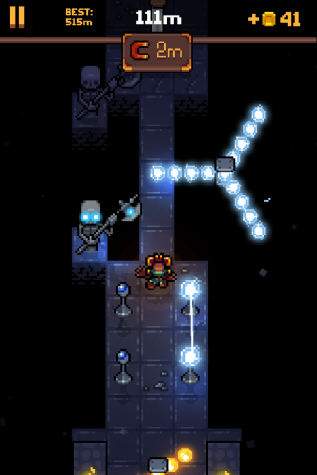 As a whole, Redungeon is an excellent, well-optimized mobile game. I may have a few minor issues with its graphics and controls, but the addicting gameplay and rewarding characters keep me coming back for more.