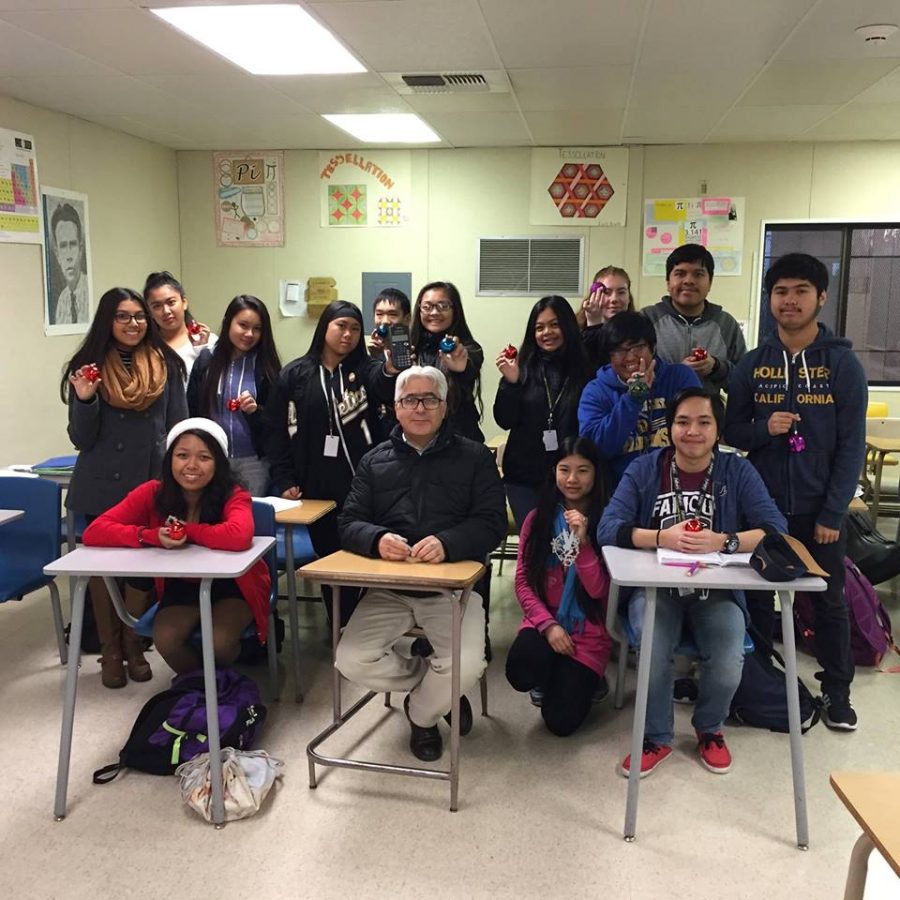 Originally I had planned to make an interview with Mr. Maz for this website. But unfortunately, I never got the chance.

Mr. Mazaheri was one of Pinole Valley High School’s longest-standing teachers, having worked there for over a decade. He taught Algebra 2/Trig, Physics, Statistics, and Calculus. Over the past year, he had been diagnosed with cancer, and began to undertake chemotherapy. For a while, it seemed to be working out; he had reported that his recovery was looking good. However, further complications arose when he unexpectedly came down with pneumonia very recently; he was sent to the hospital for about half a week. He was able to make a return the following Monday, but had to leave by lunch period due to his condition. As the rest of the week progressed, the outlook seemed that he would have to take substantial time off for recovery.

That Monday would prove to be the last time I would see him. On December 15th, the last day before our winter break, it was announced that Mr. Mazaheri had passed away from his health complications.

I really can’t describe how I felt after hearing the news. I just felt off for the rest of that day. And I’m feeling off writing this right now. It was just a perplexing thing to wrap my head around. Here was my teacher, who had taught me last year, was teaching me this year, whom I had planned to take next year, and he was just gone. While talking to friends who were also students of his, it was clear that it was a mutual sentiment.

I’m not just saying this for the sake of it; in my honest opinion, Mr. Maz was my favorite teacher at Pinole Valley.

Ironically, he was also my hardest teacher at Pinole Valley; this was another mutual sentiment among his students. They guy was pretty darn well-known for being a challenging teacher, but that’s one of the very things I appreciated: he was a challenge. A good kind of challenge. See, the thing about a challenge is that the harder it is, the greater the payoff will be. He was the only teacher where I felt I really needed to study; consequently, getting a good grade in his class felt especially rewarding compared to my other classes. He would even skim over some optional advanced concepts if we were up for it. When you have a dose of adversity that’s very concentrated in one area, it really gives you an opportunity to apply yourself, and that’s a fantastic exercise for anyone to build character. Plus, his status as a difficult teacher made him my first choice for writing a college recommendation (an opportunity that’s sadly gone).

But let me be clear: it was hard material he was teaching, not that he was a hard person to deal with. On the contrary, Maz really wanted to see all of his students succeed. He had a unique system of what he called “lending credit”; what he would do is temporarily boost the grades of struggling students, so that they would see what they could achieve and be motivated to really push themselves. A day in his class would usually be devoted to either lecture or working; whenever we worked, he would be totally cool with socialization provided that we were getting our work done on time. Speaking of which, he made calendars to help us keep track of where we should be at, but we could still turn in work at our own pace as long as it was done before test dates. For me, this created a fantastic work environment, and he even encouraged us to collaborate on our understanding of concepts and problems. If I ever got really stuck, he was always at his desk, happy to give a hint or through explanation on particularly tricky problems. This became so useful to me that I started coming in at lunch; not only was the invaluable help still available, but it was a quiet environment where I could get substantial work done for any of my classes. And I haven’t even talked about his notes yet; he would consistently give us loads of the most through and in-depth notes I’ve ever received from a teacher, as well as countless practice tests and extra problems. He sometimes stayed up in the early hours of the morning before class to write this stuff, just so that we could have it. I know it sounds like the kind of statement some teachers would say in a forced manner to get some “genuine appreciation” out of their students. But Maz just mentioned it so matter-of-factly, as if it was just a normal, un-noteworthy thing he did. That shows real devotion, and surely gets my genuine appreciation.

You’ll notice that last paragraph is pretty massive; I almost don’t expect half of the audience to read the whole thing. But it shows all the evidence of the countless things he did to help us out. I noticed he would be hard on some students who found themselves distracted often, but it goes back into what I said before: he just really wanted to see all of you guys succeed. To quote my good friend Angel, “If you screwed up in his class, it was your own fault.”

Putting aside teaching for a second, Maz was just an awesome guy. There was a lot of goofy qualities about him, like how he would just randomly lapse into German sometimes, or his trademark “no mickey-mousing” phrase. One time in Algebra 2, our photographer Lestyn Park came to class with a fresh haircut. Maz complimented him, remarking that it made him resemble an owl, before proceeding to make owl noises. Just out of the blue. And then there were his stories. Man, this guy told us all kinds of life stories; everybody listened because they were just so darn entertaining. During a session of army training, an adjacent soldier (with bad eyesight) shot his target for him, while he was shooting a rock for “the beautiful sound it made.” When he was young, he climbed his roof and successfully blocked a gauge that would measure his family’s energy bills (of course, he found out later that you couldn’t just do that). The last one I remember him telling us dealt with legal issues and shady car salesmen. I’m gonna miss those stories.

I’m gonna miss Maz in general. Let me re-iterate that you could ask any of his students, and I’m certain that they’d agree with a lot of the stuff I’ve mentioned in here. Everyone was saddened by his loss; I know a couple friends were moved to tears.

Mr. Mazaheri, on behalf of PVHS, we thank you so much for your service to us; you were a great member of our community, and neither you nor your work will be forgotten.

I’d truly like to offer my deepest condolences to family and friends of Mr. Maz. It’s been hard on us here at PVHS, but it must be a monumental challenge for you guys, especially so close to the holidays. Again, I’m not saying any of this for the sake of it, but just judging by the way he was (and he would talk about his family a lot in class), he loved you all very much; just about anyone would know that. Best wishes, love, and support to you all.

I’d also like to give a super-duper shout out to our math specialists Pat O’Kane and Susan Richards. Since last year, these two folks were brought in to work with the math program and to provide support for Maz in the classroom. Now, during these hard times of his unexpected absence, they’ve stepped in to fill in his role for the time being. Personally, I’ve gotten to know “Mr. O” from last year’s Algebra 2 class, as well as this year’s Physics class. Since middle school, I’ve dealt with many a replacement teacher, and boy, that can really drive a class straight off a cliff sometimes. Which is why I’m so, so very thankful and appreciative to have quality substitutes (let alone volunteers) that go above and beyond with their work. A million thanks to you two.